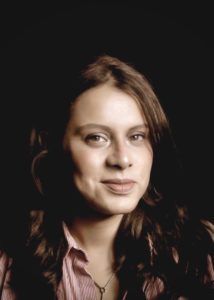 Journalist in a deep dive into virtuality and emerging technology

Pakinam Amer is an award-winning science journalist, editor and podcaster. She’s a VR enthusiast, an emerging technology research affiliate at the Massachusetts Institute of Technology, and a recipient of the Knight Science Journalism fellowship from MIT. Recently, she produced and hosted a podcast series about science communication for scientists for Nature Careers. She also served as the editor-in-chief of Nature Middle East, one of the regional copies of Nature magazine.She has written for Nature, the Boston Globe, the Associated Press, Egypt Today and Egypt Independent. She has an MA in Investigative Journalism from City, University of London.Pakinam is passionate about comics, science fiction, film, game design, virtuality, long-form narrative and immersive storytelling.